All the days are blending together now.  I’ve waited too long to do all of this writing but forcing myself to do it now somehow seems like the right thing to do.

On Saturday the 20th, my Firefly lineup was, if I may say, awesome.  I almost couldn’t have planned it any better.

Then eventually headed over to see Andrew McMahon In The Wilderness.  Who was amazing.  His entire performance was great, and even though “Cecilia & The Satellite” is the hit, I really liked “Canyon Moon.”

Next, was one of my top three artists I wanted to see… Gary Clark, Jr.  I’ve been waiting to see him for a while, and honestly didn’t think I’d get the chance (and was able to see him twice in 10 days or so, which was special).

Surprisingly enough, the next artist on my list wasn’t on many other peoples.  Can’t figure out why other than not enough airplay or publicity, but i have to say, I really did Zola Jesus.  And the people that knew about her, were just as happy as I was to be able to get up close & personal.   I found it extremely ironic that she was performing on the Forest Stage and her album is called “Tiaga,” the Russian word for forest.

Not to put too much of a downer on the headlining artists, but this is how close I got to Foster The People singing “Coming Of Age:”

I left the festival grounds shortly after taking that video, and it was a good thing, too, because there was a hurricane alert pushed to all of our phones via the Firefly app. 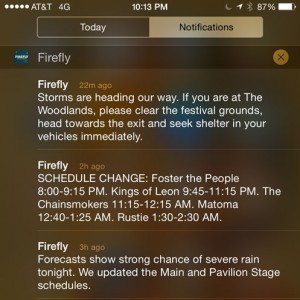 So they ended up cancelling the late night shows and rescheduling for Sunday…  Which I’ll get to next.